The (PA) State of HIV Planning: A report back from the September 2013 PA HPG meeting

The (PA) State of HIV Planning: A report back from the September 2013 PA HPG meeting

This week, I had the privilege of attending the PA statewide HIV Planning Group (HPG) meeting.  Pennsylvania has a new integrated planning body that includes both HIV prevention (for all counties except Philadelphia) and HIV care (for the whole state).  This overlaps with our local care planning for the five counties in Southeastern PA.  You can read a little more about this, plus get the meeting schedule, on the PA HPG's website. 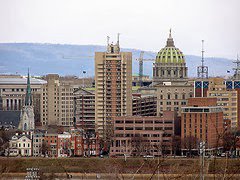 ﻿Members of the PA state HPG are from all over Pennsylvania, so the group conducts its business over the course of two-day meetings held every other month.  This cuts back on travel time and expenses, and gives the group a lot more time to work together.  These meetings include sessions with the entire body, as well as smaller breakout task groups each day to dive into meatier issues.  I live-tweeted the PA HPG meeting. If you're interested in a play-by-play, you can search hashtag #PAHPG over on Twitter.

The first day started off with reports back from each of the three task groups: one that deals with membership issues, another dealing with priority setting and resource allocations, and a third that plans needs assessments.  Note: This structure will shift in January, but that's what it looks like for now.

After updates, we broke into task groups.  I sat in with the priority setting and resource allocation group on the first day.  Their requirements are a little bit different from what I'm usually involved with, because the care funding comes through Ryan White Part B.  For Part A funding (what we get in the Philadelphia Eligible Metropolitan Area, or EMA), the planning body is required to both set service priorities and allocate/budget money for these services.  (You can get a refresher on the Philadelphia EMA Part A process here.)  On the state, Part B level, the planning body does not have to make the budget, so the task group focused largely on the priority setting process.  They had an extensive conversation on the type of data and information the PA HPG would need in order to make its decisions, planning out almost a year's worth of presentations.  They also briefly discussed the process itself, which will have some parallels to the Philadelphia EMA's process.

Later on, the whole PA HPG reconvened to talk about their new protocols, which were similar to what we call bylaws for our planning bodies here.  HPG members were asked to review the protocols for changes.  The HPG also got an introduction to the three new HIV data managers at the Department of Health.  These new positions include one data manager each for care, prevention, and the Special Pharmaceutical Benefits Program (SPBP).

Last on the HPG's agenda was concurrence for the statewide HIV prevention 2013 interim progress report and 2014 grant application.  This document gets sent to the CDC, and the CDC then uses the document to decide how much prevention money the state will receive.  It includes changes, successes, and challenges to prevention services and the planning process itself.  It also includes special projects and relatively detailed budgets.  The document is 62 pages long, with around 72 pages of appendices.  I actually read the whole thing - the most notable part for me was about a special demonstration project called Project Silk.  Project Silk is a drop-in program geared toward minority LGBTQ ball youth in Pittsburgh, and has had some pretty remarkable results.  They've managed to reach a challenging population, and they are using a peer navigator program.  I'm looking forward to hearing more about the project at future meetings.  The PA HPG did ultimately concur (or agree with) the application after hearing a very thorough presentation, and that was the last item on the first day's agenda.

Day two was much shorter, and we broke almost immediately into task groups.  On the second day, I decided to move over to the needs assessment group.  If you're not familiar with the term "needs assessments," it just refers to ways that we can figure out what people need, like surveys, focus groups, town hall meetings, and other similar activities.  The task group wants to look particularly at people who are "late-testers," meaning that they aren't diagnosed with HIV until they're already sick, so they're diagnosed with AIDS at the same time.  They also want to find out more about provider capacity - essentially, whether the providers have room for more clients.  Plus they're planning to gather as much data as possible from sources like SPBP and partner services to help them plan their needs assessments.  We're going to be sharing our data with them to help with this process.

Later on, the whole PA HPG got back together for task group reports.  While I was with the needs assessment group, the priority setting and resource allocation task group continued talking about the tool in the context of the whole process.  They also further refined their presentation schedule for 2014, and talked about having a more unified priority setting process that would get input from many local consumer groups.  I offered to speak with our own Positive Committee about the process when they had more information.  Then we heard from the membership task group, which plans to have an ongoing orientation process that includes mentorship.  They requested that the Department of Health have the application materials translated into Spanish.  They're also looking for more HIV-positive consumer members.

Last on the agenda was the final approval of the HPG protocols, including any updates.  Once that was taken care of, there was a small surprise.  Ken McGarvey, the director of the HIV/AIDS Division of the PA Department of Health (DOH), created a model of the care continuum that pops its head into many of the DOH's documents.  At the end of the meeting, there were surprise t-shirts immortalizing the famous "McGarvey HIV Service Model."

A steering committee meeting followed the main meeting, but it was time for me to head back to Philadelphia.  I'm looking forward to attending the next PA HPG meeting, and excited for increased collaboration between our planning bodies and the PA statewide group!﻿﻿﻿﻿